RSS Feed
← Road Food
Me Myself and I →

Get Us Out From Under 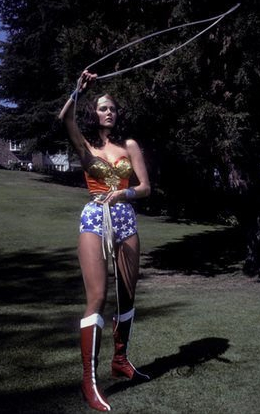 My 4 year old daughter is obsessed with Wonder Woman – not the comic book and not the cartoon.  She’s obsessed with Lynda Carter’s 1975, Diana Prince/Wonder Woman.   I told her about the bullet-proof bracelets and the spinning-around-bun-morphing-into-cascading-super-hero-mop, and she was IN.  We had talked about it so much that, by the time the envelope arrived from Netflix, we were crazy giddy.  I popped popcorn, made some fresh lemonade, and we settled in for a Mama/Daughter mini-marathon.

Grace was enthralled.  I was astonished.  The look of a television show produced in the 1970’s is really tough for a 21st century, adult television watcher to process.  First of all, it moves SLOWLY.  We’ve all become so accustomed to Tivo and Angry Birds and INSTANT GRATIFICATION that the exposition and actual story-telling that used to happen in scripts seems extraneous and boring.  I found myself wondering, “What’s the point?  Where’s the action?  Where’s the invisible plane that looks like plastic?  Where’s the firestorm of bullets deflected by the wristbands?”  THE MOTHER was bored, but the kid was rapt.  She loved every minute of it.

My daughter’s media-life experience consists of old school Disney animation, Mary Poppins and The Sound of Music.  She doesn’t watch insane cartoons, and she certainly doesn’t watch the crazy-pants-tween-a-rific Disney Channel.  She is, dare I say it, a bit media-sheltered.  So judge me.  Fine.  I don’t care.  My child is pure and lovely and open, and I don’t want her little, sweet, 44 inch self saying “Suck it, dude,” just because she heard Bart Simpson mouthing off to his little sister on t.v.

The second thing I noticed was that Lynda Carter, one of the most gorgeous faces I’ve ever seen on screen, with her light eyes and dark hair, would NEVER be cast in 2012.  She had actual thighs.  She had hips.  She looked like a woman.  She was Sophia Loren in a star-studded panty and eagle-emblazoned bustier.  When I was a little girl, she was everything I wanted to be.  I remember tying my hair in a knot, just so I could spin and shake my head and make the knot fall down just like she did.  I’d put on my Wonder Woman underoos, my red boots and tie a towel around my neck for a cape.  I made gold bracelets out of construction paper and pretended to deflect bullets by the chicken house in our backyard.  I wanted to BE that woman.

And now?  That woman would be cast in “plus-size” roles.  We, as a media-consuming public, have so changed the standard of beauty, that Racquel Welch, Jane Mansfield and Marilyn Monroe would all be considered chubby by today’s network standards.  During pilot season, gorgeous Lynda Carter could audition for the funny best friend or the quirky ex-wife who lives right next door!  No network would sign off on those thighs for a leading lady.  It’s gross, and it’s shallow, and, sadly, it’s totally true.  I hate that it’s true, but I accept it.  However, as a wise, old woman once told me – Accepting something does NOT mean you have to LIKE it.  And I don’t.  But it’s my job, and I gotta play the game.

So I work out before other people are waking up in the morning, and I say no to a lot of life’s delicious temptations.  I sacrifice a lot of indulgence for my chosen career, and I try not to complain about it too much, because the reward is that I get paid to do what I absolutely love.  Fans will ask me how I stay slim or how I have time to exercise with my schedule.  Well, I don’t have time, but I do it anyway.  I don’t expect credit for it or a pat on the back, but I think it’s important to note that by not talking about how much work I do to stay in t.v. shape, I make it seem like size 6 just comes naturally, like I’m one of those annoying models who says “Oh, I eat everything in sight!  I just CAN’T seem to gain weight!”  And lemme tell you, this body of mine would probably like to be about a size 12.  I’m of Italian, Welsh & French descent –I’m built much more like a Vargas girl than Kate Moss.   But, I’m not blind.  I see that the parameters of beauty have changed, and I see what the camera does.  To paraphrase the beautiful, insanely funny Ellen Degeneres – “I know, I know,  the camera adds ten pounds.  You’d think after all this time, they’d figure out a camera that SUBTRACTS ten pounds.”  Therefore, I WORK.  I don’t let too many days go by without a serious sweat session, and, yes, I say NO to junk food.  I also say NO to ranch dressing and biscuits & gravy and caramel marshmallows . . . oh, crap.  Now I’m hungry.

Most days, I don’t resent it.  I usually don’t even think about it.  But there are mornings when I drag myself out of bed at 4 a.m. to workout before my 5 a.m. set call, shower as fast as humanly possible, throw my wet hair into a bun and race to sit in bumper to bumper freeway traffic for 45 minutes.  When I finally arrive to work starving, only to find a craft service table full of doughnuts, I have to step away.  I close my eyes, take a deep breath, and give myself a pat on the back for being strong and focused and disciplined.  And then I spin.  I pick up speed, pull my hair down, and spin myself dizzy, and remind myself that, no matter how hard I have to work, at the end of the day, I am proud of myself.  I am Wonder Woman.

Posted in Uncategorized. Bookmark the permalink.
← Road Food
Me Myself and I →